Speech therapy for people with Schizophrenia. Find the best speech therapist near you. 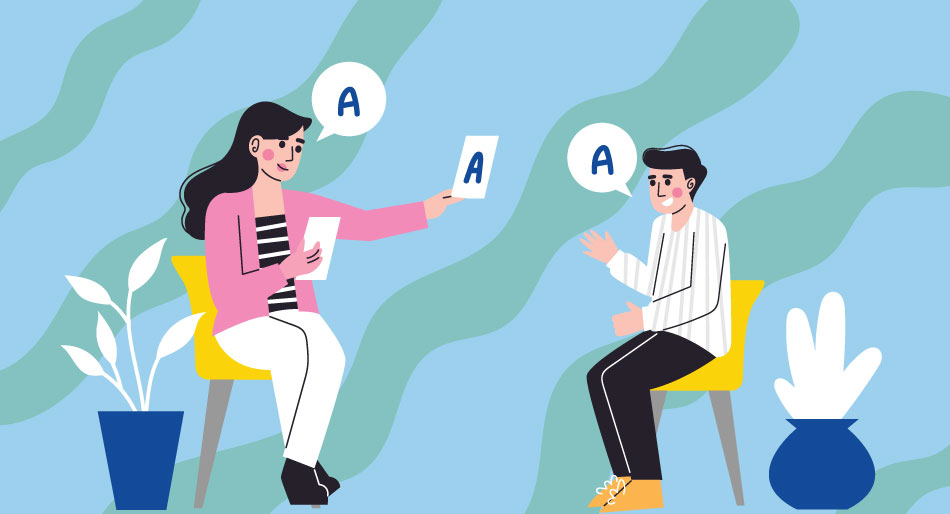 Speech Language Pathologist studies the prevention, assessment and treatment of human communication disorders (oral and written language, voice, swallowing, hearing and oral motor skills) The role played by the speech and language pathologist in Mental Health is based on performing specific procedures for evaluation, intervention, counselling and follow-up on the SLP disordered processes. Speech language Therapy involves creating strategies to promote and maintain individuals functional communication which is a fundamental component of social interaction. Functional communication in terms of verbal and nonverbal i.e. gestural communication is promoted.

Schizophrenia is a mental health illness in which ones’ general thought patterns and beliefs get disturbed and altered. It leads to belief in non- existent entities which causes hallucinations and creates strange or unusual behavior patterns.

Classic signs are presented as positive and negative symptoms. Positive symptoms can be observed by oneself and the family members. Positive symptoms include disorders of perception(hallucinations), language, behavioral organization (severely disorganized or catatonic) and of thinking (delusional ideas).

Negative symptoms include inferential thinking, language and communication, decrease in attention and loss of emotion. It is also seen that there is a restriction on the fluency and productivity on thought and language (alogia). Restriction on the intensity of emotional expression is also seen. The negative symptoms do seem to correlate with the reduction in language usage and even social and communication needs.

Individuals with schizophrenia, demonstrate disorganized speech which typically arises from abnormal thought processes. It is seen that an individual quickly jumps from one thought to another while having a conversation. The speech can be so disorganized that it might interferes with one’s communication. Disorganized speech may also include-

Communication disorders have been consistently considered as symptoms in the context of schizophrenia, which implies a deficit of language comprehension and production (oral and written), pragmatic-discursive components and syntactic and semantic domains.

In individuals with schizophrenia, not only is the production of speech limited but also the understanding and interpretation of speech and language. Speech- language therapist assess and treat individuals with difficulty in their production of language, voice, fluency, swallowing and cognitive skills. Individuals with schizophrenia do have difficulty with understanding figurative language or abstract speech which is being conveyed through metaphors, proverbs or through humorous expressions which speech and language therapists can work on.

As we all know, communication is the fundamental basis of a social life and in individuals with schizophrenia this is impaired. In acute phases, communication is extremely limited. In some cases, individuals may report that they aren’t able to speak or there isn’t any voice coming out which isn’t due to any laryngeal or neural injury but more so because of anxiety. The anxiety which is contributed by different factors within the context of the illness. Speech -language pathologist/therapist will work on counselling and relaxation of the laryngeal muscles. Many a time, collaborative approach with the psychologist is also suggested.

Individuals with schizophrenia have difficulty with turn taking and usage of appropriate prosody. There might present with a lack inflection of their voice, emotions representation.

It has been considered that the disorder of thought can include the decrease in speech, echolalia, empty discourse because it implies a disconnection or detachment of communicative competence. It could also be due to failure in understanding the communicative context. Failures in the usage of grammatical links which allows a more accurate cohesion of speech. Due to this they present with an irregular speech and more difficulties in metaphor interpretation.

Considering that a Speech Language Pathologist/ Speech therapist is a professional whose specialty is the study of normal and pathological processes of human communication then its practice corroborates to lead to an individual’s quality of life since communication is essential for personal and social skills development.

In current times, pharmacological and counselling is the primary line of treatment. Along with cognitive behavioral therapy, there also exists occupational therapy, dance and movement therapy, speech and language therapy which might benefit the individual. Limited studies have been done as the individual speech and language difficulties may not always be the most pre occupying symptoms in comparison to other symptoms such as hallucinations.

What causes a child to have speech disorders? Find the best speech therapist in Mumbai.
https://mpowerminds.com/blog/What-causes-a-child-to-have-speech-disorders-Find-the-best-speech-therapist-in-Mumbai

How do I know that my child needs speech therapy? Find the best speech therapist in Kolkata.
https://mpowerminds.com/blog/How-do-I-know-that-my-child-needs-speech-therapy-Find-the-best-speech-therapist-in-Kolkata